People flocked to the great outdoors when COVID-19 changed our lives. The pandemic added an extra layer of appreciation for places like Fort Clinch. Public parks where people can enjoy time outdoors in a beautiful natural setting, and be nurtured by nature. Fort Clinch State Park is an extra special place with its historical significance as well, a window to the past. As Amelia Island Living has noted before, one can “walk over a drawbridge and through a brick tunnel to travel back in time to the year 1864 at this Civil War-era fortress.”

Back in the Great Depression era of the 1930s, the fortress and acreage was protected when it became part of the Florida park system. On this barrier island, it remains a coastal oasis not lost to development.

Amelia islanders are an especially lucky bunch to have this wonderful park “in our backyard.” It might not have been so, however. The U.S. Army had sold the Fort Clinch property in 1926 to private entities, when it was thought to no longer be of strategic value. According to Florida’s park service, “Fortunately, a few people recognized the significance of this historic site, and Fort Clinch became one of Florida’s first state parks in 1935.” This was, indeed, fortunate for Nassau County residents — those of the past, the present, and future generations.

It’s about a 3-mile bike ride one way to pedal along the beautiful canopy road to the far end of the park where the fortress Visitor’s Center/Museum is located. Enjoy riding six miles in and out under a thick tree canopy, dripping with Spanish moss. The canopy throws shade below, very welcomed cover on hot Florida summer days.

Fort Clinch is a peaceful environment to explore, with plenty of room to roam around. The park sprawls across a substantial chunk of Amelia Island’s northern tip, about 1,400 acres with three miles of beachfront. It encompasses the entire width of the island from the eastern Atlantic coast to its western shoreline along the Amelia River.

There are various “natural communities” within the park. These include beach dunes, coastal grassland, coastal strand, maritime hammock, freshwater and salt marsh — a mix of habitats and native flora and fauna.

As the gateway to the Great Florida Birding Trail on the east coast, Fort Clinch is a great place for bird observation, with nearly 250 species recorded here. According to the Duval Audubon Society, “Northeast Florida is the second-largest migration path for birds on the Atlantic Flyway.”

The park is critical habitat for Wilson’s Plover (areas of the park are roped off during bird nesting season). The beaches are also resting habitat for a variety of birds — least terns, royal terns, black skimmers and more.

Please be respectful of wildlife, and keep a distance when visiting Fort Clinch. Note that dogs are not permitted on the beachfront at Fort Clinch. Signs are posted, asking visitors not to disturb resting birds on the beach (i.e. don’t send them flying by getting too close). Learn more about northeast Florida coastal birds at the dedicated information kiosk at Fort Clinch.

The park is a popular place to go fishing along the Cumberland Sound and the river side of the park (or from the jetty). The campgrounds have become so popular, however, it’s a challenge to get a reservation, especially the favored sites.

Fort Clinch is also enjoyed by those who simply want to go beach combing, looking for shells or shark’s teeth. And history buffs, eager to tour the fascinating Civil War-era fortress. There’s also an Amelia Island Lighthouse lookout deck along the marsh, with benches to sit for a spell.

The park’s panoramic waterfront views are second to none on Amelia Island. For the highest elevation, walk up to the line of cannons inside the fortress wall — the waterfront vista is breathtaking. The state park is bordered by the Atlantic Ocean on the east, the St. Marys River and Cumberland Sound on the north, Amelia River on its west. Egans Creek marsh hugs the park’s southwest border.

From the beachfront, one can watch the boats go by along the river. Sailboats, pleasure cruises, and shrimp boats pass by. Occasionally visitors at Fort Clinch see submarines heading in or out of the nearby Kings Bay, GA Navy base.

One Of Florida’s First State Parks

A legacy of President Franklin D. Roosevelt and “The New Deal,” Fort Clinch’s restoration was a project of the Civilian Conservation Corps (CCC), under supervision of the National Park Service. Fort Clinch is one of nine Florida State Parks developed with the labor of the CCC.

Peering into the past (historic photo below circa 1939 from “Florida Memory,” State Archives of Florida), the dilapidated condition of the Fort Clinch barracks is in stark contrast to the Fort as it stands now. Today it’s an educational monument saluting the past and enjoyed by thousands of visitors each year.

Several years ago, a new statue, funded by donations organized by the “Friends of Fort Clinch,” was placed near the Fort’s Visitors Center, a tribute to the Civilian Conservation Corps (CCC) that helped restore this park. The CCC’s Company 1420 constructed park roads, campground and museum, plus removed sand and debris from the fortress to begin its restoration.

Since the park was first established in 1935, Fort Clinch has become surrounded by development over the last 85 years. In the last year and a half, under construction has been a super-sized hotel project, just outside the Fort Clinch entrance gate.

The huge structure, a 37,000 square foot building, houses two hotels under one roof. It’s easy to imagine the combination of condos, homes, and hotels that would likely cover the maritime hammock, dunes, beachfront and riverfront behind this Fort Clinch gate today, had the historic Fortress and acreage not been protected back in the 1930s.

Fans of Fort Clinch can show support for this wonderful park by joining the “Friends of Fort Clinch” (FOFC), a Citizens Support Organization (non-profit 501(C) 3). An annual membership is a $30 donation.

“Friends” receive an annual membership card providing 12 ENTRIES per year for a car load of up to eight people to the park. Gift memberships are also available for purchase.

Checks made out to the “Friends of Fort Clinch, Inc.,” (FOFC) can be mailed to Fort Clinch at 2601 Atlantic Ave., Fernandina Beach, FL 32034. Questions about memberships? eMail: [email protected]

Regular daily fees to visit Fort Clinch depends on your transportation mode and number of people entering. Driving a vehicle through the entry gate with single occupant is $4. Otherwise it’s $6 per vehicle (2 to 8 people). The entry fee drops to $2 per person if riding a bicycle or walking into the park. To actually stroll over the drawbridge and through the brick walls to tour the historic Civil War-era fortress itself costs an additional $2.50 per person, and is definitely worth it.

Fort Clinch State Park’s daily hours returned back to “normal” time from 8 a.m. until about 15 minutes past sundown as of May 1, 2021. (During the pandemic hours had been cut back to 5 p.m. closing). Also, daily capacity limits (that had capped number of people who could enter during pandemic), has been lifted.

With undeveloped areas of Amelia Island dwindling, the North Florida Land Trust (NFLT), a non-profit, has been buying up a selection of Amelia Island properties to preserve. This includes some parcels near Fernandina’s Egans Greenway and lots located in American Beach. The initiative is called “Amelia Forever.”

Browse Past 10 Articles About Fort Clinch

Fort Clinch Day Use At Half Capacity, Campgrounds Open 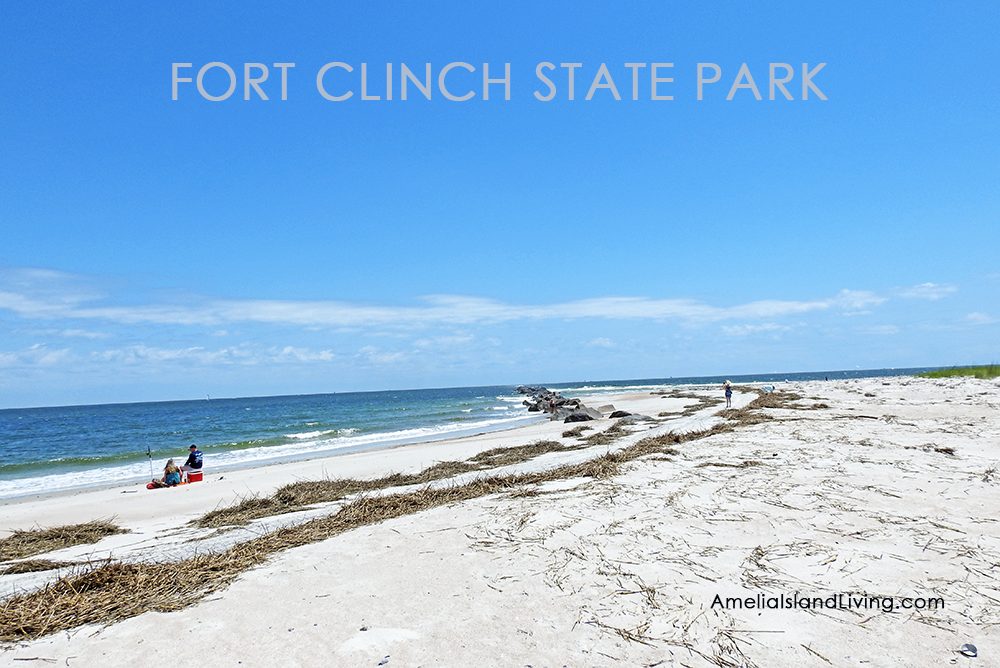